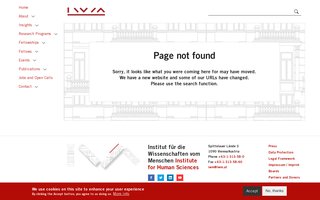 Ivan Krastev, Shalini Randeria: The Paradoxes of a Post-Covid-19 World

Anita Dick, 3. Juli 2020
IWM Rector Shalini Randeria in conversation with IWM Permanent Fellow Ivan Krastev on the paradoxical world and new power dynamics emerging from the COVID-19 crisis. The conversation is part of the new launched podcast series “In Converstation With” of the Graduate Institute (...)

Anita Dick, 3. Juli 2020
A number of states and public authorities have reappropriated massive amounts of unspent welfare funds under Covid-19. In their article published in “Global Challenges”  IWM Rector Shalini Randeria, Deval Desai and Christine Lutringer use the cases of the EU and India to demonstrate why these (...)

Marion Gollner, 1. Juli 2020
Over the last decade political authoritarianism has been on the rise across the globe. The ‘authoritarian wave’ has touched most continents and regions. So even before the crisis unleashed by Coronavirus many peoples across the world were resisting rising authoritarianism, nationalism and racism. (...)

Anita Dick, 1. Juli 2020
The focus on individual agency and responsibility comes, indeed, with the denial of public health as a collective good (and responsibility). From the AfD and Pegida in Germany, to the FPÖ and Identitarian groups in Austria, to a range of far-right groups in Italy and Poland, over the past months (...)

Masha Gessen: ‘I never thought I’d say it, but Trump is worse than Putin’

Anita Dick, 29. Juni 2020
Former IWM Visiting Fellow Masha Gessen in an interview with The Guardian on their latest publication “Surviving Autocracy” (Granta Books, 2020) and who’s worse Putin or Trump? After Donald Trump was elected president of the United States in 2016, Masha Gessen wrote an essay in the New York Review (...)

Ruth Wodak:What future for the EU after COVID-19?

Marion Gollner, 28. Juni 2020
June 25, 2020"The contradiction between transnational institutions and nation states has always been inherent in the conception of the EU". In her most recent article published on Open Democracy linguist and IWM Visiting Fellow Ruth Wodak says that the current crisis urgently calls for visions (...)

Rosa Brooks: The Future of War

Anita Dick, 25. Juni 2020
IWM Lectures in Human Sciences, 2016 Traditional political and legal conceptions of war assume that war is a temporary departure from “normal” politics, that wars are bounded both in space and time, and that it is a relatively straightforward matter to identify the parties and combatants in a (...)

Peter Pomerantsev: From Information to Disinformation Age. Russia and the Future of Propaganda Wars

Anita Dick, 25. Juni 2020
Books in Perspective, June, 2016. Despite decades of struggle for freedom of speech and access to unbiased information, the 21st century has not ended manipulation of and by the media. On the contrary, conflicts are being fought and won on TV-screens,  airwaves and the Internet with an alarming (...)

Anita Dick, 25. Juni 2020
Panel Discussion, June, 2017. It has become a commonplace that we live in a “post-truth” era. Is “post-truth” just another chapter in the long history of propaganda, or does it represent a new phenomenon? What we currently observe in public discourse is indeed a tendency to dismiss the very (...)